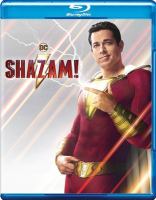 Everybody a superhero inside of them, it just takes a bit of magic to bring it out. In Billy Batson's case, by shouting out one word, this streetwise fourteen-year-old foster kid can turn into an adult superhero, courtesy of an ancient wizard. Still a kid at heart, inside a ripped, godlike body, he revels in this adult version of himself by doing what any teen would do with superpowers: have fun with them! But he'll need to master these powers quickly to fight the deadly forces of evil.

Based on the DC Comics character created by Bill Parker & C.C. Beck.

A foster child discovers that he has the ability to transform into the grown up superhero, Shazam.