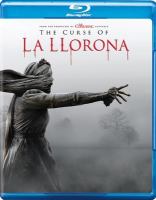 The curse of La Llorona [videorecording] /

Director/co-writer Michael Chaves’s horror film draws supernatural inspiration from Mexican folklore. In 1970s Los Angeles, a social worker discovers that the children under her care are being pursued by the Weeping Woman: a female ghost who abducts living children because she lost her own child. She turns to a priest for assistance in warding off the terrifying maternal spectre. ~ Augustine Chay, Rovi

Features: The myth of La Llorona; Behind the curse; The making of a movie monster; deleted scenes; storyboards.