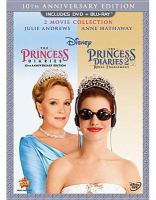 As the future queen of Genovia, Princess Mia has everything a girl could want - except the enchanting romance she's always dreamed of. Comic complications rule the day in these delightfully engaging stories about finding out who you really are, and discovering what it takes to make your dreams come true!

Based on the novel by Meg Cabot.

Princess diaries: For teenager Mia Thermopolis, just surviving each school day is an adventure. Then she receives the shocking news from her grandmother that she is a real-life princess. So begins a comical transformation towards poise and princess-ness, including a media storm, jealous schoolmates, and a plot to take over her country.

Princess diaries 2: Now settled in Genovia, Princess Mia faces a new revelation: she is being primed for an arranged marriage to an English suitor.

Both films: English subtitles for the deaf and hard of hearing (SDH).