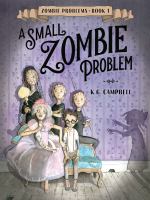 In his fiction debut--and the start of a new series--celebrated illustrator K.G. Campbell brings a touch of Tim Burton to this singularly strange and wonderful story about a lonely boy whose life is about to get a whole lot more complicated when a zombie follows him home. <br> <br> August DuPont has spent his whole life inside a dilapidated house with his aunt Hydrangea. His lonely existence ends abruptly with the arrival of an invitation to meet an aunt--and cousins--he didn't even know existed. When Aunt Orchid suggests that August attend school with his cousins, it's a dream come true. But August has scarcely begun to celebrate his reversal of fortune when he is confronted by a small problem on his way home. So begins an adventure filled with a wild child, a zombie, a fabled white alligator, and an unimaginable family secret.

When August DuPont, eleven, leaves his eccentric Aunt Hydrangea's crumbling mansion for the first time ever, he meets family, makes a friend, and attracts a zombie.

<opt> <anon I1="BLANK" I2="BLANK">Thunder rumbled and lightning flickered across the troupe of skeletons: a gruesome, silent circus of grim clowns and tumbling, hollow-eyed acrobats. Skulls gleamed. Skinless faces grinned madly. Bony fingers extended toward the lone, living boy before them. The boy who had made them. These weren't real skeletons, you understand, but models the boy had built. Their ribs and femurs had been crafted from coat-hanger wire, their skulls from clay molded over Ping-Pong balls. The spindly frames were painstakingly wrapped in strips of paper dripping with a paste of flour and water. When dry and hardened, the papier-mâché had been sanded to a finish smooth as ivory. The figures stood about sixteen inches tall and wore festive costumes cobbled together from old bandannas, misplaced buttons, and other odds and ends. The ringmaster sported a top hat made from a wine cork and held a chopstick baton. The trapeze artist's swing had once hung in a parakeet's cage. The strongman boasted an impressive mustache of steel wool and boots fashioned from black duct tape. The boy was engrossed in creating the latest addition to this bizarre, theatrical group. Hunched over a rickety desk, working in the murky light of a stormy afternoon, he was oblivious even to the sound of a sudden shower pattering on the roof above his head. Beneath his fingers, the model was nearing completion. Its costume was cut from the satin lining of an old waistcoat and studded with tarnished sequins. The hat was a solid silver thimble. The face was painted with particular care. He was outstanding--so splendid, in fact, that the boy had already given the clown a name. "Nearly there, Kevin," the boy advised. "You just need a nose." Now, you're probably thinking that Kevin is a rather everyday sort of name for a clown. Clowns, after all, generally come with whimsical names like Tickles or fancy foreign ones like Punchinello. But to be fair, the boy had little experience in thinking up names for things, and Kevin was one of the few he had come across. He carefully positioned a red plastic pushpin over Kevin's face when suddenly the desk lurched beneath the boy's elbow, jarring the pin from his tweezers and sending it tippy-tapping across the floorboards. "Aw, shoot!" cried the boy, scrambling after the tiny thing. "It's the last one; where'd it go?" A scarlet speck nestling in a crevice of the rough floorboards caught his eye. "Relax, everyone, I found it!" he reassured his bony audience. While he was on his knees, the boy added another thin book to the stack supporting one of the desk's broken legs. He pressed firmly on the desk's drop-down front to test its stability. "All right. Here we go." The boy made a second attempt to center the pin-nose. His breathing slowed. His eyes narrowed. He gripped the tweezers firmly but gently. This was the finishing touch; it had to be perfect! But Kevin the oddly named clown was not destined to receive his nose that day. For suddenly, without warning, the wet afternoon was pierced by the sounds of smashing, crashing, and a loud and terrible, bloodcurdling scream. "August!" shrieked a woman from the lower floor. "AUGUST!" Tweezers, pushpin, and stool flew in all directions as August (for such was the boy's name) jumped up. His boots pounded on the stairs as they raced toward the kitchen, from where the screams were coming. There, a dramatic scene confronted him. You'd be forgiven for concluding that a brutal crime had just occurred, for the room was strewn with overturned crates and broken bottles. The linoleum, range, and icebox were spattered and dripping with bloody red fluid. But the powerful, vinegary aroma and sting to August's eyes revealed the substance to be nothing more sinister than . . . hot sauce. Skittering and spinning about in the crimson pools on the floor, the skirts of her ballgown swirling around her, a woman was swatting frantically at a small yellow butterfly. It bobbed above her crooked pink tiara while she continued to screech at the top of her lungs, as if under attack by a pterodactyl. "August," the woman cried with desperation, "help me!" But August was saved the trouble of rescuing the lady. He had scarcely passed through the doorway when the butterfly abruptly abandoned its assault and casually flitted across the pungent wreckage to alight purposely on the boy's head. The woman, finally silenced, observed this unusual development with blanched face and gaping mouth. "Aunt Hydrangea?" said August with concern. But there was no response. The lady's eyes rolled upward into her head, and she promptly keeled backward, stiff as a board, in a dead faint. Excerpted from A Small Zombie Problem by K. G. Campbell All rights reserved by the original copyright owners. Excerpts are provided for display purposes only and may not be reproduced, reprinted or distributed without the written permission of the publisher.</anon> </opt>