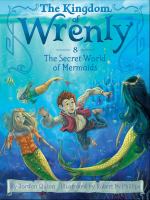 The secret world of mermaids /

Prince Lucas discovers underwater secrets when he gets a glimpse of the mermaids' kingdom in this eighth chapter book in the fantastical Kingdom of Wrenly series.<br> <br> Lucas and Clara are floating on a raft when a wave hits and throws Lucas into the sea. Before being pulled up to the surface, Lucas catches a glimpse of a coral kingdom filled with castles, towers, and...mermaids! King Caleb tells him that the mermaids have always treasured their privacy, and everyone should respect that. But despite his father's advice, Lucas is determined to find out more about the mermaids' secret world!<br> <br> With easy-to-read language and illustrations on almost every page, The Kingdom of Wrenly chapter books are perfect for beginning readers.

Lucas and Clara are floating on a raft when a wave casts them into the sea, where Lucas catches a glimpse of a coral kindom and a dark-haired mermaid helps him, but when his father, King Caleb, hears of this, he scolds Lucas and tells him he has broken an age-old pact.