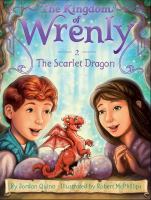 In this second Kingdom of Wrenly chapter book, Lucas and Clara search for special berries that will cure the scarlet dragon.<br> <br> In this second book in The Kingdom of Wrenly series, an unusual egg has been found on Crestwood, the land of dragons. When the egg starts to hatch, the king, queen, and Prince Lucas are there to see what emerges. It's...a scarlet dragon! Everyone is amazed to see the creature, which they have only heard about in tall tales.<br> <br> King Caleb declares that the special dragon will belong to an overjoyed Prince Lucas, who vows to keep his dragon safe. But when the scarlet dragon gets sick, the only cure is a potion made with vixberries that grow deep in the forest of Burth (the land of trolls). Lucas and Clara set out to find these special berries, but the task is harder than they expected. Will they be able to find the berries and save the scarlet dragon?<br> <br> With easy-to-read language and illustrations on almost every page, The Kingdom of Wrenly chapter books are perfect for beginning readers.

A newly-hatched, rare scarlet dragon comes under the special protection of the King and Prince Lucas, so when the dragon becomes ill Lucas and Clara set out for the forest of Burth to find the vixberries needed for a cure.

<opt> <anon I1="BLANK" I2="BLANK">The Scarlet Dragon Excerpted from The Scarlet Dragon by Jordan Quinn All rights reserved by the original copyright owners. Excerpts are provided for display purposes only and may not be reproduced, reprinted or distributed without the written permission of the publisher.</anon> </opt>

Prince Lucas and his friend Clara search the kingdom for the queen's missing emerald (Stone). When the kingdom's new scarlet dragon falls ill, the duo searches for the rare ingredient that can save him (Dragon). Although they lack much action, the first two books in this new adventure series will appeal to chapter book readers who like fantasy. Black-and-white illustrations enhance the texts. [Review covers these Kingdom of Wrenly titles: The Lost Stone and The Scarlet Dragon.] (c) Copyright 2014. The Horn Book, Inc., a wholly owned subsidiary of Media Source, Inc. No redistribution permitted.