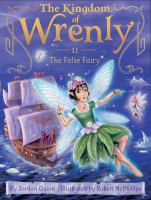 In the eleventh fantastical adventure of The Kingdom of Wrenly series, a spell makes all but one fairy disappear.<br> <br> A mysterious spell has hypnotized the fairies on the island of Primlox and now it is up to Prince Lucas and Clara for save the fairyland. Along with the last remaining fairy named Falsk, will the two friends find the missing fairies? Or is Falsk, who is famous for telling wild stories, leading Lucas and Clara into a trap?<br> <br> With easy-to-read language and illustrations on almost every page, The Kingdom of Wrenly chapter books are perfect for beginning readers.

"A mysterious spell has hypnotized the fairies on the island of Primlox and it's up to Prince Lucas and Clara to save them"-- Provided by publisher.

<opt> <anon I1="BLANK" I2="BLANK">The False Fairy Excerpted from The False Fairy by Jordan Quinn All rights reserved by the original copyright owners. Excerpts are provided for display purposes only and may not be reproduced, reprinted or distributed without the written permission of the publisher.</anon> </opt>