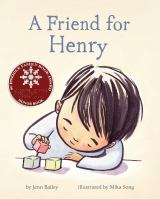 A friend for Henry /

Henry, a boy on the autism spectrum, has been on the lookout for a friend in his class. His best efforts are often misunderstood, but after an art project mix-up and a Reading Time setback, Henry finds a way to build a friendship in this charming and reassuring picture book.

Henry would like to find a friend at school, but for a boy on the autism spectrum, making friends can be difficult, as his efforts are sometimes misinterpreted, or things just go wrong--but Henry keeps trying, and in the end he finds a friend he can play with.

While the other kids lining up outside Classroom Six are chatting pleasantly, Henry stands apart, body stiff and face blank. Nevertheless, the text tells us: Henry was looking for a friend. Unfortunately, everyone is just too much for Henry: some kids are messy; others dont follow class rules. Vivianne waves her rainbow-painted fingernails too close to Henrys face; Samuel is a thunderstorm, booming and crashing, disrupting the carpet squares Henry has painstakingly organized by color, which throws Henry into a tantrum. The story turns hopeful when Henry meets Katie, a quiet girl who enjoys reading. Songs pastel-hued ink and watercolor illustrations depict realistic social situations in a supportive and diverse classroom, paying particular attention to facial expressions ranging from frustration to joy. Although seemingly told from the perspective of a boy on the autism spectrum, the story never uses this label, leaving readers to follow Henry through his day without preconceptions. julie hakim azzam (c) Copyright 2019. The Horn Book, Inc., a wholly owned subsidiary of Media Source, Inc. No redistribution permitted.