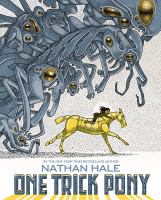 The aliens have arrived. And they're hungry for electricity. In the Earth of the future, humans are on the run from an alien force - giant blobs who suck up electrical devices wherever they can find them. Strata and her family are part of a caravan of digital rescuers, hoping to keep the memory of civilization alive by saving electronics wherever they can. Many humans have reverted to a pre-electrical age, and others have taken advantage of the invasion to become dangerous bandits and outlaws. When Strata and her brother are separated from the caravan, they must rely on a particularly beautiful and rare robot pony to escape the outlaws and aliens - and defeat the invaders once and for all.

In a future where alien beings consume technology as a few humans try to preserve it, Strata, her brother, and a friend are separated from their caravan and, with a wonderful robotic horse, must fight their way back.

In this future-set graphic novel, Earth has been invaded by a hostile alien species. Drones known as pipers ruthlessly harvest technology, metals, and other resources, decimating civilization and forcing most humans to band together in marauding clans for survival. Strata and her family are part of the Caravan, a moving town whose inhabitants (including sentient robots) are committed to preserving computers and data--possibly all thats left of thousands of years of human culture. This gripping science-fiction saga plays out in expertly paced and varied comic panels rendered in black, white, and gray with effective yellow accents. The story centers on Strata and her fierce, unwavering devotion to a robot horse she excavates on a salvage expedition with her brother and a friend. Her discovery sets off a terrifying chain of events that ultimately threatens not only Strata and horse Kleidi but also Stratas family, the Caravans electronic cultural relics, and humanitys very existence. With an engaging, racially diverse cast, this high-stakes epic adventure should have wide appeal: the fast-moving plot features a brave and principled heroine battling a hostile alien enemy in a bleak dystopian landscape. Hale shepherds this complex narrative with the same sure hand as his graphic novel series of real stories from history (Nathan Hales Hazardous Tales: One Dead Spy, rev. 9/12, and sequels), showing that hes equally at home in a speculative future as he is in the past. kitty flynn (c) Copyright 2017. The Horn Book, Inc., a wholly owned subsidiary of Media Source, Inc. No redistribution permitted.