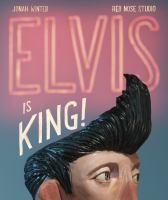 Here's the perfect book for anyone who wants to introduce rock 'n' roll and its king to the child in their lives. In single- page "chapters" with titles like "The First Cheeseburger Ever Eaten by Elvis" and "Shazam! A Blond Boy Turns into a Black-Haired Teenager," readers can follow key moments in Presley's life, from his birth on the wrong side of the railroad tracks in the Deep South, to playing his first guitar in grade school, to being so nervous during a performance as a teenager that he starts shaking . . . and changes the world! Jonah Winter and Red Nose Studio have created a tour-de-force that captures a boy's loneliness and longing, along with the energy and excitement, passion, and raw talent that was Elvis Presley.

Presents the life and legacy of Elvis, from his birth in Mississippi through his music career, his time in the army, his marriage, and his induction into the Rock & Roll Hall of Fame.

In this innovative look at Elvis Presley's against-the-odds rise from Tupelo, Mississippi, ragamuffin to King of Rock and Roll, Winter gets real: he uses folksy vernacular ("Times is hard") and credits the African American church with the King's sound ("It's black music sung by a Southern white man"). The illustrations--photos of handmade three-dimensional scenes--feature improbably emotive wax-like characters. (c) Copyright 2019. The Horn Book, Inc., a wholly owned subsidiary of Media Source, Inc. No redistribution permitted.