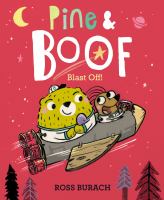 <p>Frog and Toad meets Elephant & Piggie in the second installment of a humorous and heartfelt picture book series about the adventures of Boof the bear and Pine the porcupine, from the acclaimed author-illustrator of There's a Giraffe in My Soup and I Am Not a Chair!</p> <p>There's no one Boof the bear would rather spend the day with than his best friend--Pine the porcupine. And there's nothing he'd rather do than collect things, which is his favorite hobby of all time. So one day, when Boof is collecting rocks with Pine, he doesn't think the day could get any better, until . . .</p> <p>An egg falls on Boof's head--all the way from outer space! Now it's up to Pine and Boof to return the space egg to its space nest . . . before it hatches. They'll need a rocket ship, space training, and plenty of sandwiches for the trip. But most important, they'll need each other to complete a mission that's out of this world!</p> <p>Pine & Boof: Blast Off! tells the story of an unlikely friendship through highly original characters and vibrant illustrations that are impossible not to love.</p>

When an egg from outer space falls on Boof's head, he and his best friend Pine must travel to outer space to return the space egg to its space nest.