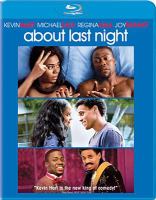 English, French or Spanish dialogue; Spanish, English or French subtitles; subtitled for the deaf and hard of hearing; described video.

Originally released as a motion picture.

A modern reimagining of the classic romantic comedy, this contemporary version closely follows new love for two couples as they journey from the bar to the bedroom and are eventually put to the test in the real world.