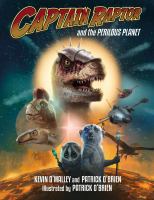 Captain Raptor and the perilous planet /

In their newest endeavor, intrepid leader Captain Raptor and his space-dino crew must rescue a team of scientists from a doomed planet--while evading flaming asteroids, predatory beasts, and a volcano about to blow. Could this be the end of Captain Raptor? Old fans and new will be drawn to the mix of dinosaurs, space, and science-fiction parody.

Captain Raptor and the crew of the Megatooth rush to help rescue scientists from the planet Mammalia who are trapped on Pyros Prime, an unstable planet with exploding volcanoes.

<opt> <anon I1="BLANK" I2="BLANK">On the outer edge of the Erratus asteroid belt, the mighty spaceship Megatooth cruises, ready for action. Captain Raptor and his crew are hard at work on a new force-field shielding system.         Lieutenant Threetoe maps another slow run through the belt. Professor Angleopterous happily tinkers with his new shielding system.          "Starting shield test number 215. Isn't this exciting, captain?"         "Absolutely thrilling, professor," sighs the captain. It's slow work for a dinosaur who lives for action. Excerpted from Captain Raptor and the Doomed World by Kevin O'Malley, Patrick O'Brien All rights reserved by the original copyright owners. Excerpts are provided for display purposes only and may not be reproduced, reprinted or distributed without the written permission of the publisher.</anon> </opt>