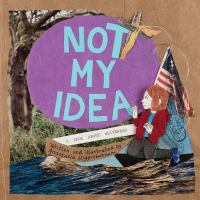 Not my idea : a book about whiteness /

<p>An honest explanation about how power and privilege factor into the lives of white children, at the expense of other groups, and how they can help seek justice. --THE NEW YORK TIMES</p> <p>**A WHITE RAVEN 2019 SELECTION**</p> <p>NAMED ONE OFSCHOOL LIBRARY JOURNAL'S BEST BOOKS OF 2018</p> <p>Not My Idea: A Book About Whiteness is a picture book about racism and racial justice, inviting white children and parents to become curious about racism, accept that it's real, and cultivate justice.</p> <p>This book does a phenomenal job of explaining how power and privilege affect us from birth, and how we can educate ourselves...Not My Idea is an incredibly important book, one that we should all be using as a catalyst for our anti-racist education. --THE TINY ACTIVIST</p> <p>Quite frankly, the first book I've seen that provides an honest explanation for kids about the state of race in America today. --ELIZABETH BIRD, librarian</p> "It's that exact mix of true-to-life humor and unflinching honesty that makes Higginbotham's book work so well..."--PUBLISHERS WEEKLY (*Starred Review) <p>A much-needed title that provides a strong foundation for critical discussions of white people and racism, particularly for young audiences. Recommended for all collections. --SCHOOL LIBRARY JOURNAL (*Starred Review)</p> <p>A necessary children's book about whiteness, white supremacy, and resistance... Important, accessible, needed. --KIRKUS REVIEWS</p> <p>A timely story that addresses racism, civic responsibility, and the concept of whiteness. --FOREWORD REVIEWS</p> <p>For white folks who aren't sure how to talk to their kids about race, this book is the perfect beginning. --O MAGAZINE</p>

A white child sees a TV news report of a white police officer shooting and killing a black man. "In our family, we don't see color," his mother says, but he sees the colors plain enough. An afternoon in the library's history stacks uncover the truth of white supremacy in America. Racism was not his idea and he refuses to defend it.