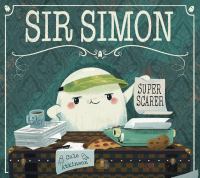 Meet Sir Simon, Super Scarer. He's a professional ghost who has been transferred to his first house. And just in time! He was getting tired of haunting bus stops and forests and potatoes. And to top it off, this house is occupied by an old lady - they're the easiest to haunt! But things don't go as planned when it turns out a KID comes with this old lady. Chester spots Simon immediately and peppers him with questions. Simon is exasperated... until he realises he can trick Chester into doing his ghost chores. Spooky sounds, footsteps in the attic, creaks on the stairs - these things don't happen on their own, you know! After a long night of haunting, it seems that maybe Chester isn't cut out to be a ghost, so Simon decides to help with Chester's human chores. Turns out Simon isn't cut out for human chores either.

Simon the ghost tries to trick Chester the kid into doing his ghost chores, but finds they have more in common than he expected.

When ghost Simon is assigned to haunt an old house, he's thrilled that an easy-target grandma is moving in. However, her grandson, Chester, is excited, not frightened, by their spectral housemate. Exasperated, Simon tricks Chester into doing "ghost chores" like rattling chains, but they soon discover common interests and become friends. Expressive retro-style illustrations complement the spooky yet humorous tale. (c) Copyright 2019. The Horn Book, Inc., a wholly owned subsidiary of Media Source, Inc. No redistribution permitted.