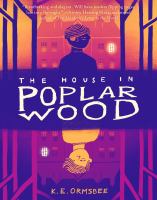 The house in Poplar Wood /

Haunted Mansion meetsStranger Things<br> <br> ★ "A smart, thrilling mystery" - Publishers Weekly, starred review<br> <br> ★ "Magical elements, evocative, intelligent writing, and ever-ratcheting suspense."- Kirkus Reviews, starred review <br> <br> "The foreboding atmosphere perfectly matches the dark mystery and high stakes confronting the middle-schoolers." - Booklist <br> <br> For as long as the Vickery twins can remember, Lee and his mother have served Memory, while Felix and his father assist Death. This is the Agreement. But one Halloween, Gretchen Whipple smashes her way into their lives. Her bargain is simple: If the twins help her solve the murder of local girl Essie Hasting, she'll help them break the Agreement. The more the three investigate, however, the more they realize that something's gone terribly wrong in their town. Death is on the loose, and if history repeats itself, Essie's might not be the last murder in Poplar Wood. Simultaneously heartwarming and delightfully spooky,The House in Poplar Wood is a story about a boy's desire to be free, a girl's desire to make a difference, and a family's desire to be together again.

The Vickery twins, Lee and Felix, live in a house in Poplar Wood, where, because of the "Agreement," their mother serves Memory, and their father assists Death, and only Lee is allowed to leave the house, except for Halloween; but when a local girl is murdered, Gretchen Whipple, daughter of the mayor, offers the boys a deal--help her solve the crime and she will help them break the Agreement, and regain their freedom.

Ormsbee personifies Death and Memory and indentures a human family to them in this allegorical story set in present-day Tennessee. Once readers surrender to the premise, they'll be swept up in the attempts of twins Lee and Felix to escape their family's Agreement with help from strange new-girl Gretchen. Magical, mysterious, and somewhat macabre, their story escalates to a rousing conclusion. (c) Copyright 2019. The Horn Book, Inc., a wholly owned subsidiary of Media Source, Inc. No redistribution permitted.