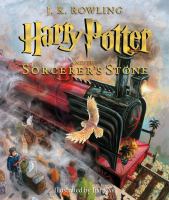 Harry Potter and the sorcerer's stone /

For the first time, J.K. Rowling's beloved Harry Potter books will be presented in lavishly illustrated full-color editions. Kate Greenaway-award-winning artist Jim Kay has created over 100 stunning illustrations, making this deluxe format a perfect gift as much for a child being introduced to the series, as for the dedicated fan.<br>  <br> Harry Potter has never been the star of a Quidditch team, scoring points while riding a broom far above the ground. He knows no spells, has never helped to hatch a dragon, and has never worn a cloak of invisibility.<br>  <br> All he knows is a miserable life with the Dursleys, his horrible aunt and uncle, and their abominable son, Dudley -- a great big swollen spoiled bully. Harry's room is a tiny closet at the foot of the stairs, and he hasn't had a birthday party in eleven years.<br>  <br> But all that is about to change when a mysterious letter arrives by owl messenger: a letter with an invitation to an incredible place that Harry -- and anyone who reads about him -- will find unforgettable.

Originally published in a slightly different form in the United Kingdom by Bloomsbury in 1997 under title: Harry Potter and the philosopher's stone.

Sequel: Harry Potter and the Chamber of Secrets.

The boy who lived -- The vanishing glass -- The letters from no one -- The keeper of the keys -- Diagon Alley -- The journey from platform nine and three-quarters -- The sorting hat -- The potions master -- The midnight duel -- Hallowe'en -- Quidditch -- The mirror of Erised -- Nicholas Flamel -- Norbert the Norwegian ridgeback -- The forbidden forest -- Through the trapdoor -- The man with two faces.

Rescued from the outrageous neglect of his aunt and uncle, a young boy with a great destiny proves his worth while attending Hogwarts School for Witchcraft and Wizardry.

(Intermediate) Orphaned Harry Potter has been living a dog's life with his horrible relatives. He sleeps in the broom cupboard under the stairs and is treated as a slavey by his aunt and uncle. On his eleventh birthday, mysterious missives begin arriving for him, culminating eventually in the arrival of a giant named Hagrid, who has come to escort him to the Hogwarts School of Witchcraft and Wizardry. Harry learns that his parents died saving him from an evil sorcerer and that he himself is destined to be a wizard of great power. Harry's astonished introduction to the life of wizardry starts with his purchase, under Hagrid's guidance, of all the tools of an aspiring sorcerer: wand, robes, cauldron, broomstick, owl. Hogwarts is the typical British public school, with much emphasis placed on games and the honor of the House. Harry's house is Gryffindor, the time-honored rival of Slytherin: he becomes a star at Quidditch, an extremely complicated game played with four different balls while the whole team swoops about on broomsticks. He studies Herbology, the History of Magic, Charms, Potions, the Dark Arts, and other arcane subjects, all the while getting closer to his destiny and the secret of the sorcerer's stone. He makes friends (and enemies), goes through dangerous and exciting adventures, and justifies the hopeful predictions about him. The light-hearted caper travels through the territory owned by the late Roald Dahl, especially in the treatment of the bad guys-they are uniformly as unshadedly awful as possible-but the tone is a great deal more affectionate. A charming and readable romp with a most sympathetic hero and filled with delightful magic details. a.a.f. (c) Copyright 2010. The Horn Book, Inc., a wholly owned subsidiary of Media Source, Inc. No redistribution permitted.