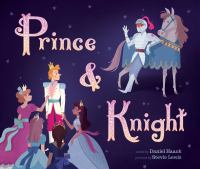 "Victorious . . . the premier queer-friendly fairy tale." Kirkus Reviews, starred review <br> <br> "An illuminating fairy tale for young readers to be able to see that not every prince would like to marry a princess." School Library Journal <br> <br> "A colorful and entertaining tale exploring sexuality, acceptance, and young love." Booklist <br> <br> In this modern fairy tale, a noble prince and a brave knight come together to defeat a terrible monster and in the process find true love in a most unexpected place.<br> <br> "Thank you," he told his parents. <br> <br> "I appreciate that you tried, <br> <br> but I'm looking for something special <br> <br> in a partner by my side." <br> <br> Once upon a time, in a kingdom far from here, there was a prince in line to take the throne, so his parents set out to find him a kind and worthy bride. The three of them traveled the land far and wide, but the prince didn't quite find what he was looking for in the princesses they met.<br> <br> While they were away, a terrible dragon threatened their land, and all the soldiers fled. The prince rushed back to save his kingdom from the perilous beast and was met by a brave knight in a suit of brightly shining armor. Together they fought the dragon and discovered that special something the prince was looking for all along. This book is published in partnership with GLAAD to accelerate LGBTQ inclusivity and acceptance.

A prince and a knight in shining armor find true love in each other's embrace after fighting a dragon together.

A prince must choose a bride, but all the women he meets lack...something. He realizes what's missing when a knight in shining armor saves him from a dragon. The simplistic story works as a valentine to same-sex love, but several verses stumble over themselves to complete a rhyme; the glossy illustrations conjure classic Disney movie stills. (c) Copyright 2019. The Horn Book, Inc., a wholly owned subsidiary of Media Source, Inc. No redistribution permitted.