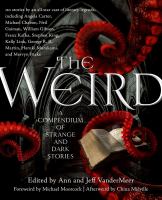 The weird : a compendium of strange and dark stories /

<p>From Lovecraft to Borges to Gaiman, a century of intrepid literary experimentation has created a corpus of dark and strange stories that transcend all known genre boundaries. Together these stories form The Weird , and its practitioners include some of the greatest names in twentieth and twenty-first century literature.<br> <br> Exotic and esoteric, The Weird plunges you into dark domains and brings you face to face with surreal monstrosities. You won't find any elves or wizards here...but you will find the biggest, boldest, and downright most peculiar stories from the last hundred years bound together in the biggest Weird collection ever assembled.<br> The Weird features 110 stories by an all-star cast, from literary legends to international bestsellers to Booker Prize winners: including William Gibson, George R. R. Martin, Stephen King, Angela Carter, Kelly Link, Franz Kafka, China Miéville, Clive Barker, Haruki Murakami, M. R. James, Neil Gaiman, Mervyn Peake, and Michael Chabon.<br> <br> The Weird is the winner of the 2012 World Fantasy Award for Best Anthology </p>

An oversized anthology of dark and bizarre tales written throughout the past century includes entries by international best-sellers and award-winners, including Neil Gaiman, Stephen King, and Franz Kafka.

From the slow-building creepiness of H.P. Lovecraft's classic "The Dunwich Horror" to eerie stories by lesser-known authors like Michel Bernanos ("The Other Side of the Mountain") and Michal Ajvaz ("The End of the Garden"), the 110 stories in this massive compendium illustrate a type of literature that is not wholly compatible with either the fantasy or horror labels but, instead, falls into a category best described as "the weird." Marked primarily by eeriness of atmosphere or strangeness of subject matter, these stories range from ghost stories (e.g., Olympe Bhely-Quenum's "A Child in the Bush of Ghosts") to the surrealism found in Kathe Koja's "Angels in Love." Fans of Stephen King, Clark Ashton Smith, Ray Bradbury, Jorge Luis Borges, Neil Gaiman, Tanith Lee, Poppy Z. Brite, Joyce Carol Oates, and other past and contemporary authors will find selections to please them or to introduce them to a new aspect of their favorite author. Arranged in chronological order, from 1908 to 2010, each story features a biographical introduction and brief commentary. Verdict All in all, this is a solid anthology for aficionados of the altogether weird. (c) Copyright 2012. Library Journals LLC, a wholly owned subsidiary of Media Source, Inc. No redistribution permitted.