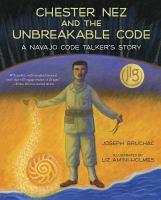 As a young Navajo boy, Chester Nez had to leave the reservation and attend boarding school, where he was taught that his native language and culture were useless. But Chester refused to give up his heritage. Years later, during World War II, Chesterand other Navajo men like himwas recruited by the US Marines to use the Navajo language to create an unbreakable military code. Suddenly the language he had been told to forget was needed to fight a war. This powerful picture book biography contains backmatter including a timeline and a portion of the Navajo code, and also depicts the life of an original Navajo code talker while capturing the importance of heritage.

"As a boy, Chester Nez was taught his native language and culture were useless, but he was later called on to use his Navajo language to help create an unbreakable military code during WWII"-- Provided by publisher.

Young Chester Nez was sent to a missionary boarding school that taught English, but he ignored his teachers by retaining his native Navajo language and culture. As a soldier in World War II, Chester became one of the original Navajo code talkers, helping to defeat the Japanese. Muted illustrations enhance the informative biography. A portion of the Navajo code is appended. Timeline. (c) Copyright 2019. The Horn Book, Inc., a wholly owned subsidiary of Media Source, Inc. No redistribution permitted.