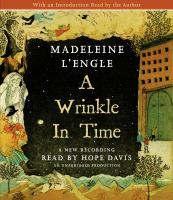 A wrinkle in time [sound recording] /

This special edition of A Wrinkle in Time includes a new essay that explores the science behind the fantasy.Rediscover one of the most beloved children's books of all time: A Wrinkle in Time by Madeleine L'Engle:Meg Murray, her little brother Charles Wallace, and their mother are having a midnight snack on a dark and stormy night when an unearthly stranger appears at their door. He claims to have been blown off course, and goes on to tell them that there is such a thing as a "tesseract," which, if you didn't know, is a wrinkle in time. Meg's father had been experimenting with time-travel when he suddenly disappeared. Will Meg, Charles Wallace, and their friend Calvin outwit the forces of evil as they search through space for their father?<br> <br> <br> From the Trade Paperback edition.

Read by Hope Davis; introduction read by the author.

Meg and her friends become involved with unearthly strangers and a search for her father, who disappeared while engaged in secret work for the government.

In her note-perfect graphic-novel adaptation, Larson's affection for the Murry family's first adventure is clear. She skillfully pins down the sensation of traveling through space by tessering, the changing faces of Mrs. Whatsit, and the dedicated care of Aunt Beast. This version is given enough space, panel by panel, to mark every vital plot twist and character realization. (c) Copyright 2013. The Horn Book, Inc., a wholly owned subsidiary of Media Source, Inc. No redistribution permitted.