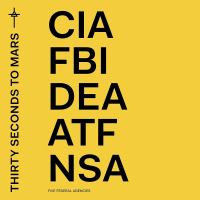 On their fifth full-length, America, a once-rocking Thirty Seconds To Mars intend to save the heart and soul of their homeland with an effort as vast and polarizing as the country itself. The trio, marching in step with messianic frontman Jared Leto, seems to leave no mainstream genre untouched. Riddled with trap beats, millennial whoops, and plenty of electronic-synth sheen, America is Thirty Seconds To Mars executing their typically dramatic bombast at a fever pitch. For many fans, the lack of rock aggression will prove divisive, and yet for the longtime faithful who are as devoted to the Mars gospel as the band itself, America should be appreciated as a bold and risky move. The band is nothing if not convicted to its ideas. The twin pillars of America are "Walk On Water" and "Great Wide Open," two epic triumphs that best capture the album's entire ethos. Opener "Walk On Water" rallies listeners to fight for hope and change, a euphoric dose of optimism that could convert the hardest of hearts. "Great Wide Open" kicks off the second half of the album with U2-sized cinematic drama, playing like a new national anthem. They are undeniably grand and highlights in the Mars catalog. The rest of the album is hit-or-miss, depending on the listener's headspace and generosity. "Dangerous Night" shimmers with production by Zedd, who layers electronic snaps and cavernous bass atop the band's arena-sized, inspirational rock. The result sounds similar to what former tourmates Muse attempted with their late-era output. Elsewhere, "Rescue Me" sounds like the Chainsmokers were let loose in the studio with Maroon 5, while "Hail To The Victor" bridges the trap buzz of Taylor Swift's "...Ready For It?" with Fall Out Boy's Mania. In addition to Zedd, America recruited two other unconventional guests. "One Track Mind" features a barely-there A$AP Rocky, while standout "Love Is Madness" fully utilizes Halsey's vocals on a fiery duet. If these faces seem unexpected upon first glance, they make more sense in the context of the album, which absorbs each artist's chosen genre (electronic, hip-hop, alternative R&B) in an attempt to capture that all-inclusive mono-genre spirit of America's melting pot. It's a noble effort and two bands that heavily inform Thirty Seconds To Mars have tried this sort of genre-jumping in the past (U2's Pop and Muse's The Second Law). As such, America succeeds in representing its namesake: it's confused, inspirational, and, like Thirty Seconds To Mars circa 2018, at a serious crossroads where the future is uncertain but oddly hopeful. ~ Neil Z. Yeung

Recorded at the International Centre for the Advancement of the Arts and Sciences of Sound, Los Angeles, California.