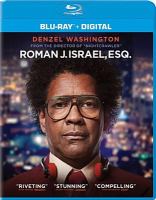 Denzel Washington stars as Roman Israel, a driven, idealistic defense attorney who, through a tumultuous series of events, finds himself in a crisis that leads to extreme action.

An idealistic defense attorney finds himself caught up in a series of events that leads him to take extreme action.