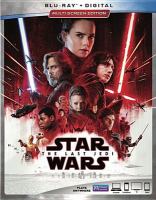 Having taken her first steps into the Jedi world, Rey joins Luke Skywalker on an adventure with Leia, Finn and Poe that unlocks mysteries of the Force and secrets of the past.

Luke Skywalker helps Rey develop her newly discovered abilities, while the Resistance prepares for battle with the First Order.

These are Blu-ray discs made for Blu-ray disc players and will not play in standard DVD players.