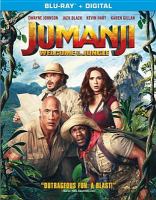 Jumanji [videorecording] : welcome to the jungle /

When four teenagers discover an old video game console and play it, they are transported into the jungle-themed game Jumanji and must escape using the skills of their selected avatars.