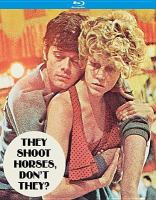 They shoot horses, dont they? [videorecording] /

The lives of a disparate group of contestants intertwine in an inhumanely grueling dance marathon.

Originally released as a motion picture in 1969.

Based on the novel by Horace McCoy.

Follows a group of contestants as they take part in a grueling dance marathon.