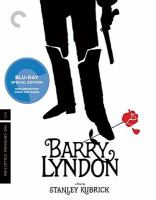 A gentlemanly rogue travels the battlefields and parlors of 18th century Europe, determined to make for himself the life of a nobleman through seduction, gambling, and dueling in this methodical film showing the rhythm and life of the period.

These are Blu-ray discs made for Blu-ray disc players and will not play in standard DVD players.

Originally released as a motion picture in 1975.

In English with optional English subtitles.

Based on the novel "The luck of Barry Lyndon" by William Makepeace Thackeray.

Essay by critic Geoffrey O'Brien and two pieces about the film from the March 1976 issue of American Cinematographer in container.

Follows the adventures of an eighteenth-century Irish rogue whose opportunism takes him from the farm to the battlefield and ultimately into high society as the husband of a widowed aristocrat.

Every frame is like a painting in this gorgeous adaptation of William Makepeace Thackeray's 1844 novel The Luck of Barry Lyndon, which was underappreciated at its 1975 theatrical release but has since greatly gained in stature. Ryan O'Neal is perfectly cast as the eponymous Irish rogue who ascends in 18th-century British society only to fall tragically. While most period films justly earn the unflattering designation "costume drama," Kubrick's stately paced masterwork feels like part of its story's era. Revolutionary camera lenses employed to shoot in candlelight contribute in no small part to the convincing naturalism. The steady use of slow zoom-outs to show gradually the characters' environment completes the convincing picture. However, it would just be a lot of pretty scenery without a strong saga; this epic has weight. -VERDICT Impeccably restored and remastered, Criterion's upgrade over Warner's passable 2011 Blu-ray is simply breathtaking. Revealing extras on a second disc make the case for a great film. [See Trailers, LJ 9/1/17.]-Jeff T. Dick, Davenport, IA © Copyright 2017. Library Journals LLC, a wholly owned subsidiary of Media Source, Inc. No redistribution permitted.