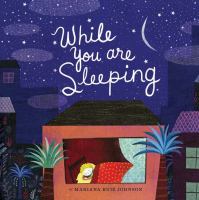 While you are sleeping /

While you are sleeping, does the rest of the world sleep, too?<br> Not everyone.<br> <br> In this dreamy book, which won the 2015 Silent Book Contest at the prestigious Bologna Children's Book Fair, Mariana Ruiz Johnson conjures up the ordinary yet extraordinary world outside the window of a sleeping child. Some people are working. Some people are eating. Some are walking their dogs, others are watching the stars. And some are setting off on an adventure that might inspire an artist to create a book. As magical as the night sky, readers will return to Mariana Ruiz Johnson's illustrations again and again, finding new stories each time they visit.

"Originally published in Italy in 2015 under the title Mentre tu dormi by Carthusia Edizioni"--Copyright page.

In this story without words, a child is sleeping while outside people carry on with their lives--working, eating, walking their dogs, and even star gazing.

In this wordless, oversize picture book, a sleeping child's dream comes to life in sweeping, intricate full-spread illustrations. Cityscapes give way to a wilderness when animal characters from the child's bedtime story head out on a Sendak-reminiscent wild rumpus; from the tantalizing open windows to a sky full of twinkling stars and a forest lush with curling plants, this Italian import is a visual delight. (c) Copyright 2019. The Horn Book, Inc., a wholly owned subsidiary of Media Source, Inc. No redistribution permitted.