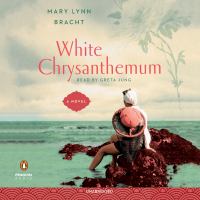 For fans of Lisa Wingate's Before We Were Yours and Min Jin Lee's Pachinko , a deeply moving novel that follows two Korean sisters separated by World War II. <p> Korea, 1943 . Hana has lived her entire life under Japanese occupation. As a haenyeo , a female diver of the sea, she enjoys an independence that few other Koreans can still claim. Until the day Hana saves her younger sister from a Japanese soldier and is herself captured and transported to Manchuria. There she is forced to become a "comfort woman" in a Japanese military brothel. But haenyeo are women of power and strength. She will find her way home. <p> South Korea, 2011 . Emi has spent more than sixty years trying to forget the sacrifice her sister made, but she must confront the past to discover peace. Seeing the healing of her children and her country, can Emi move beyond the legacy of war to find forgiveness? <p> Suspenseful, hopeful, and ultimately redemptive, White Chrysanthemum tells a story of two sisters whose love for each other is strong enough to triumph over the grim evils of war.

". . . A sweeping historical debut for fans of Lilac Girls, Memoirs of a Geisha, and Kristin Hannah that brings to life the heartbreaking history of Korea through the deeply moving and redemptive story of two sisters separated by World War II" -- Provided by publisher.

This moving story is based on true events in Japanese-occupied 1940s Korea. Hana is a haenyeo, a female diver and the breadwinner for her family, making money from what she retrieves from the ocean's floor. Hana and her younger sister, Emi, are taught never to be alone with a Japanese soldier. When Hana surfaces from a dive, she sees a soldier stalking her unknowing sister. She diverts the soldier's attention to herself, thereby saving her sister. Then Hana is transported to Manchuria to become a "comfort woman" for the military. Chapters alternate between the sisters' voices, and the narrative moves between the 1940s and 2010s as Emi approaches the end of her life. Hana suffers unimaginable humiliation and pain, while Emi endures a lifetime of survivor's guilt. Her children bring her some joy, but she never forgets Hana's sacrifice. Narrator Greta Jung's conversational style enhances the vivid descriptions. Jung also deftly presents the concluding author's note dedicating the book to all women raped during war. VERDICT Recommended for fans of historical fiction. ["Bracht humanizes tragedy while highlighting important social issues": LJ 11/15/17 starred review of the Putnam hc.]-Susan G. Baird, formerly with Oak Lawn P.L., IL © Copyright 2018. Library Journals LLC, a wholly owned subsidiary of Media Source, Inc. No redistribution permitted.