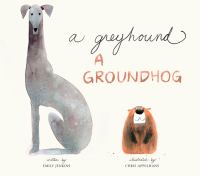 A greyhound, a groundhog /

From a heavyweight author-and-illustrator duo comes a delicious tongue twister of a picture book that features a little round greyhound and a little round groundhog. With very spare, incredibly lively language, this is an entertaining read-aloud, with two amazing-and oh-so-adorable-characters at its heart. <br> <br> When a greyhound meets a groundhog, wordplay and crazy antics ensue. The two animals, much like kids, work themselves into a frenzy as they whirl around and around one another. ( Around, round hound. Around, greyhound. ) The pace picks up ( Around and around and astound and astound ), until they ultimately wear themselves out.<br> <br> "Jenkins's masterful text is deceptively simple." -NPR on Toys Meet Snow by Emily Jenkins<br> <br> "Appelhans, whose career up to now has been in animated films such as Coraline, is a revelation." - Booklist, Starred, on Sparky!, illustrated by Chris Appelhans<br> <br> "Appelhans makes an auspicious picture book debut with strikingly beautiful watercolor and pencil illustrations. His style, reminiscent of Jon Klassen's, incorporates a muted color palette, but with a slightly softer, rounder quality, while also weaving in visual deadpan humor." - The Horn Book