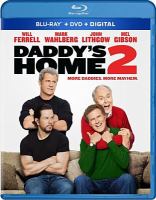 Stepfather Brad (Will Ferrell) and biological dad Dusty (Mark Wahlberg) have set aside their differences, and are content to work together to care for their children. However, their family get-together at Christmas is complicated by the arrival of Brad's fusty dad (John Lithgow) and Dusty's hell-raising pop (Mel Gibson). John Cena and Linda Cardellini co-star in this sequel to the 2015 sleeper-hit comedy Daddy's Home. Directed by Sean Anders. ~ Jack Rodgers, Rovi

Dusty and Brad agree to have Christmas in one house so their kids do not have to travel, but their plans are thrown into chaos when Dusty's macho dad and Brad's ultra-affectionate dad arrive.