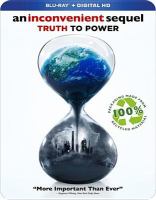 A decade after An Inconvenient Truth brought climate change into the heart of popular culture comes the follow-up that shows just how close people are to a real energy revolution.