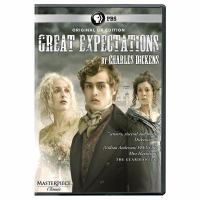 Gillian Anderson, David Suchet, Ray Winstone, Douglas Booth, and Vanessa Kirby star in this retelling of Great Expectations, the classic coming-of-age tale of an orphan whose plans to become a blacksmith are interrupted when a fateful run-in leaves him as playmate to the adopted daughter of a wealthy, yet reclusive neighbor. ~ Tracie Cooper, Rovi

Based on the novel by Charles Dickens.

Originally broadcast BBC One in three parts in 2011.

Nothing is quite as it seems in this lush retelling of Dickens' classic coming-of-age story with colorful characters: conspirators, rogues, rakes, and wretches.

Subtitled for the deaf and hard of hearing.