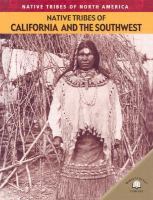 Native tribes of California and the Southwest /

Covering the Native peoples of present-day California (which has the largest Indian population of any U.S. state), New Mexico, and Arizona, plus the peoples of the adjacent regions of Texas and Mexico, this volume introduces readers to a broad range of tribal cultures, including numerous pueblo-dwelling cultures, that have both fed and drawn from the Spanish and Anglo people who fought over -- and eventually settled into -- this area. Book jacket.

An introduction to the history, culture, and people of the many Indian tribes that inhabited the region from northern California through the states of New Mexico and Arizona and adjacent parts of Mexico and Texas.

Table of contents provided by Syndetics