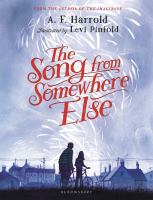 The song from somewhere else /

<p> From the author of the critically acclaimed The Imaginary comes a powerful story about friendship in the vein of Roald Dahl and Neil Gaiman. <br> <br> A School Library Journal Best Book of 2017 <br> A Wall Street Journal Best Book of 2017<br> <br> Frank thought her summer couldn't get any worse--until big, weird, smelly Nick Underbridge rescues her from a bully, and she winds up at his house.<br> <br> Frank quickly realizes there's more to Nick than meets the eye. When she's at his house, she hears the strangest, most beautiful music, music which leads her to a mysterious, hidden door. Beyond the door are amazing creatures that she never even dreamed could be real. For the first time in forever, Frank feels happy . . . and she and Nick start to become friends.<br> <br> But Nick's incredible secrets are also accompanied by great danger. Frank must figure out how to help her new friend, the same way that he has helped her.<br> <br> Paired with gorgeous black-and-white illustrations from Levi Pinfold, acclaimed author A. F. Harrold weaves a powerful story about unlikely friendship, strange magic, and keeping the shadows at bay.</p>

Saved from bullies by the class misfit, Nick, Frank is drawn to Nick's house by strange music, discovers he has incredible secrets that bring danger, and decides to help him as he helped her.

When shes rescued from a gang of bullies by Nicholas Underbridge, Frank (short for Francesca) Patel is relieved but horrified. Relieved to escape; horrified that weird Nick, the school outcast, has helped her. And Nicks home life is even stranger than Frank could have imagined: when he invites her home, she hears beautiful music issuing from the basement--music composed and played by a troll-like creature, mountainous and gray, mossy-eared and flat-faced. This is Nicks mother, a being who lives in a world only occasionally connected to ours, and from which, through an unplugged hole in the realities, Nick slipped as a baby. Even that intermittent contact is dangerous, however; and when Frank spills the secret to the bullies, she puts Nick--and, she learns, the whole world--at risk. There are people out therewho are always looking for these leechways between worlds. People wholl take it and point it at some other other world. At somewhere more dangerous than where Nicks from. And it wont just be a window anymore. Theyll force it open and let things out. Harrolds story smacks of fairy tale, fable, and dream. Its also rooted in familiar issues: the boring nastiness of bullies; the testing of courage. Harrolds incisive, poetic way with words, often dryly comic, enlivens even mundane descriptions; even more, it intensifies the vague darkness of his otherworldly imagery. Pinfolds shadowy art deepens the storys air of mystery and threat, at times filling double-page spreads, at times creeping in from the margins of pages to cloud the print itself. deirdre f. baker (c) Copyright 2017. The Horn Book, Inc., a wholly owned subsidiary of Media Source, Inc. No redistribution permitted.