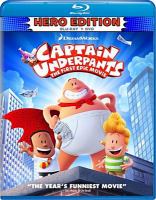 George and Harold are fourth-grade BFFs who love dreaming up funny pranks. One day, they accidentally hypnotize their principal into believing he's a dimwitted superhero. But when the new schoolteacher turns out to be a disgraced scientist bent on ridding the world of laughter, George, Harold, and the dimwitted superhero must band together to stop his evil agenda!

Based on the novel "The adventures of Captain Underpants" by Dav Pilkey.

Two elementary-school students discover that they can turn their strict school principal into the bumbling superhero Captain Underpants.