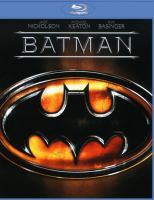 Behind the black cowl, Gotham City superhero Batman is really millionaire philanthropist Bruce Wayne (Michael Keaton), who turned to crimefighting after his parents were brutally murdered before his eyes. The only person to share Wayne's secret is faithful butler Alfred (Michael Gough). The principal villain in Batman is The Joker (Jack Nicholson) who'd been mob torpedo Jack Napier before he was horribly disfigured in a vat of acid. The Joker's plan to destroy Batman and gain control of Gotham City is manifold. First he distributes a line of booby-trapped cosmetics, then he goes on a destruction spree in the Gotham Art Museum while the music of Prince blasts away in the background, and finally he orchestrates an all-out campaign to win the hearts and minds of the Gothamites, hoping to turn them against the Cowled One. Meanwhile, reporter Vicki Vale (Kim Basinger) becomes the love of Batman's life-which of course plays right into the Joker's hands. Photographed by Roger Pratt, designed by Anton Furst, and scored by Tim Burton's favorite composer Danny Elfman, Batman was a monstrous box-office hit, making $100 million in the first ten days of release--$82,800,000 in North America alone. Incidentally, Billy Dee Williams' comparatively small role as DA Harvey Dent was originally designed to set up the sequel, wherein Dent was to convert into master criminal Two-Face; but by the time the producers got around to that character in 1995's Batman Forever, Two-Face was played by Tommy Lee Jones. ~ Hal Erickson, Rovi

Based on the DC Comics characters created by Bob Kane.

Originally released as a motion picture in 1989.

Features: commentary by director Tim Burton, Legends of the Dark Knight : the history of Batman, Shadows of the bat: the cinematic saga of the Dark Knight parts 1-3, Beyond Batman documentary gallery, On the set with Bob Kane, heroes and villains gallery,3 music videos by Prince: "Partyman," "Batdance," "Scandalous," Batman : the complete Robin storyboard sequence, theatrical trailer.

The Caped Crusader is the only one who can save Gotham City from the maniacal Joker and his sinister plans to destroy beauty.