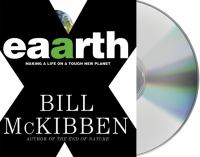 SoundPublisher: New York : Macmillan Audio, p2010Description: 7 sound discs (9 hr.) : digital ; 4 3/4 in.ISBN: 9781427209498; 1427209499.Other title: Earth.Subject(s): Climatic changes | Global warming | Greenhouse effect, Atmospheric | Environmental degradation | Nature -- Effect of human beings on | AudiobooksRead by Oliver Wyman.Summary: Argues that a large-scale shift in Earth's climate is unavoidable and explains how humans should live if they are going to sustain themselves on the new planet that their mistakes have created.
List(s) this item appears in: Earth Day

<p>"Read it, please. Straight through to the end. Whatever else you were planning to do next, nothing could be more important." --Barbara Kingsolver<p>Twenty years ago, with "The End of Nature," Bill McKibben offered one of the earliest warnings about global warming. Those warnings went mostly unheeded; now, he insists, we need to acknowledge that we've waited too long, and that massive change is not only unavoidable but already under way. Our old familiar globe is suddenly melting, drying, acidifying, flooding, and burning in ways that no human has ever seen. We've created, in very short order, a new planet, still recognizable but fundamentally different. We may as well call it Eaarth.<p>That new planet is filled with new binds and traps. A changing world costs large sums to defend--think of the money that went to repair New Orleans, or the trillions it will take to transform our energy systems. But the endless economic growth that could underwrite such largesse depends on the stable planet we've managed to damage and degrade. We can't rely on old habits any longer.<p>Our hope depends, McKibben argues, on scaling back--on building the kind of societies and economies that can hunker down, concentrate on essentials, and create the type of community (in the neighborhood, but also on the Internet) that will allow us to weather trouble on an unprecedented scale. Change--fundamental change--is our best hope on a planet suddenly and violently out of balance.

Argues that a large-scale shift in Earth's climate is unavoidable and explains how humans should live if they are going to sustain themselves on the new planet that their mistakes have created.

"Scale matters," warns environmental author McKibben (The End of Nature) in his latest. He starts by delivering the bad news-the oceans are acidifying, the sea level is rising, and the change in temperature is killing us through flood, drought, famine, storm, and disease. And it's not just the environment that's being destroyed-increased insurance claims and infrastructure damage are contributing to the financial crisis. The solution is a matter of scaling down on everything we've come to recognize as American-big cars, big homes, big business. Eaarth, the modified planet we now live on, has been irreparably changed, and the only way to stop this change is to make carbon-emission reduction a priority above all else. McKibben's words are well researched, forceful, and well timed. Verdict The news is tough to hear yet essential to know. Fans of Michael Pollan's books will appreciate McKibben's message; fans of our planet will want to heed his words. [April 22, 2010, marks the 40th anniversary of Earth Day.-Ed.]-Jaime Hammond, Naugatuck Valley Community Coll., Waterbury, CT (c) Copyright 2010. Library Journals LLC, a wholly owned subsidiary of Media Source, Inc. No redistribution permitted.