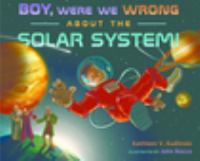 Boy, were we wrong about the solar system! /

Some people used to think that Earth was smack-dab in the middle of the universe, with all the stars and planets held in the sky by giant glass balls. Boy, were they wrong! In this follow-up to the award-winning Boy, Were We Wrong About Dinosaurs! , Kathleen Kudlinski and John Rocco look at the mistakes, mishaps, and creativity that are part of scientific discovery. From the first humans wondering about the night sky to the demotion of Pluto to dwarf planet status, this book is an entertaining and informative look at how scientific theories change over time.

Provides an examination of the solar system and the scientific theories that have changed throughout history as new discoveries have disproved old theories, including Earth being the center of the universe and Pluto being referred to as a planet.