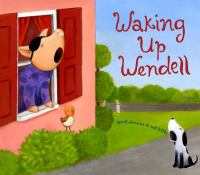 EARLY IN THE MORNING, a little bird at #1 Fish Street hops out of her nest, takes a deep breath, and begins to sing a very loud and whistley song, TWEEEEEET-TWEEEEEET-TA-TA-TA-TWEEEEEET-TWEEEEET!<br><br> So starts the story of how a chain of events results in everyone on one street waking up. The bird's song awakens Mr. Krudwig at #2 Fish Street, whose grumbling wakes up Leopold, his dog, who barks "RAPPITYRAPPITY-RAP RAPPITY-RAPPITY-RAP" . . . and wakes up Mrs. Musky, at #3 Fish Street. The antics go on and on until, finally, Lilah Hall's singing in the shower at #9 awakens the last person left who is still asleep, none other than the littlest resident at #10 Fish Street: baby Wendell Willamore.<br><br><br> From the Hardcover edition.

Early in the morning, a bird begins to sing at the first house on Fish Street, waking the man next door and his dog, and before long, as one noise leads to another, everyone on the street is awake.