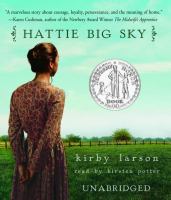 Alone in the world, teen-aged Hattie is driven to prove up on her uncle's homesteading claim.<br>For years, sixteen-year-old Hattie's been shuttled between relatives. Tired of being Hattie Here-and-There, she courageously leaves Iowa to prove up on her late uncle's homestead claim near Vida, Montana. With a stubborn stick-to-itiveness, Hattie faces frost, drought and blizzards. Despite many hardships, Hattie forges ahead, sharing her adventures with her friends--especially Charlie, fighting in France--through letters and articles for her hometown paper. <br>Her backbreaking quest for a home is lightened by her neighbors, the Muellers. But she feels threatened by pressure to be a Loyal American, forbidding friendships with folks of German descent. Despite everything, Hattie's determined to stay until a tragedy causes her to discover the true meaning of home. From the Hardcover edition.

After inheriting her uncle's homesteading claim in Montana, sixteen-year-old orphan Hattie Brooks travels from Iowa in 1917 to make a home for herself and encounters some unexpected problems related to the war being fought in Europe.

(Middle School, High School) Near the end of World War I, sixteen-year-old orphan Hattie Brooks sets out for eastern Montana, aiming to ""prove up"" the homestead claim her late uncle left her in his will. Greenhorn Hattie slowly becomes part of the prairie community, no longer Hattie Here-and-There but Hattie Big Sky. Heavy-handed messages (mostly regarding vigilante patriotism and discrimination against German Americans) weigh down Hattie's otherwise compelling and affecting story, filled with details of the WWI homefront and homestead life. Narrator Potter inhabits Hattie so fully that the listener will feel her blisters as she tries to lay down enough fence and harvest enough flax to prove her claim. (c) Copyright 2010. The Horn Book, Inc., a wholly owned subsidiary of Media Source, Inc. No redistribution permitted. All rights reserved.