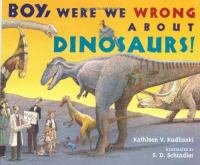 Boy, were we wrong about dinosaurs! /

The ancient Chinese thought they were magical dragons. Some old-time scientists thought that because they were so big, all they could do was float in water. Boy, were they wrong! Even today, once-common notions about dinosaurs are being revised as new discoveries are made. This lively book about the perennially popular subject of dinosaurs offers fascinating insight into how certain theories were formed, and then how those theories were proved or disproved. It demonstrates that scientific thought is as creative as it is logical and invites budding scientists to come up with their own ideas.

Examines what is known about dinosaur bones, behavior, and other characteristics and how different the facts often are from what scientists, from ancient China to the recent past, believed to be true.

(Primary) Peel back the veneer of authority from any scientific idea, and you'll see that facts aren't as constant as they seem. With a lighthearted tone, Kudlinski introduces young readers to the notion that scientists are often way off in their assumptions -- and they aren't ashamed to admit it. In the field of paleontology, where each new find has added significantly to a limited body of evidence, the trash heap of discarded ideas includes huge heavy tails, dull-colored scales, and lizardlike care for the young. For each wrong idea, Kudlinski explains the contradicting evidence that led scientists to revise their earlier thinking (though the stability of each current theory is not addressed). Lest readers think that scientists have figured everything out, she includes a few controversies (e.g., warm-blooded or cold-blooded?) that still aren't resolved. The illustrations bring the change in ideas to life, placing ""old"" and new renditions of the dinosaurs side by side for comparison. Even with a sense of humor that matches the text, the illustrations are wonderfully detailed and accurate -- at least for now. (c) Copyright 2010. The Horn Book, Inc., a wholly owned subsidiary of Media Source, Inc. No redistribution permitted. All rights reserved.