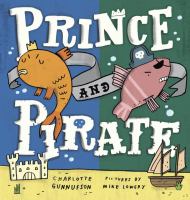 When two little fish with big personalities have to share the same tank, there are rough seas ahead!<br> <br> Prince and Pirate are proud masters of their very own fishbowls, and life goes along swimmingly-until they're scooped up and plopped into shared waters.<br> <br> Prince is horrified to find this cheeky cod trespassing in his kingdom.<br> <br> Pirate is sure this scurvy sea slug has come to plunder his treasure.<br> <br> Thus, a battle of regal sneers, seaworthy stink-eyes, and off-the-hook insults begins.<br> Prince and Pirate's hilarious duel for territory will elicit gales of giggles, hearty guffaws, and heartfelt smiles. Just when it seems their struggle might end in a silly stalemate, a little surprise convinces them to find a way to get along-swimmingly.

"When a pirate fish and a prince fish are dropped into the same fishtank, it doesn't seem like they'll ever get along--until the arrival of a third fish inspires them to cooperate"-- Provided by publisher.

Prince and Pirate, both fish, are forced to share a fish tank, but their oversize personalities clash. When a new fish arrives, the former enemies band together to welcome him. The adversaries' back-and-forth banter is full of royal and swashbuckling exclamations, perfect for reading aloud. The colorful and amiable illustrations--with an inside-the-tank perspective--buoy the humor and drama. (c) Copyright 2018. The Horn Book, Inc., a wholly owned subsidiary of Media Source, Inc. No redistribution permitted.