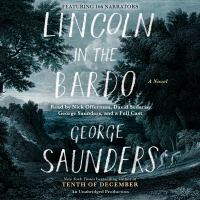 Lincoln in the bardo [sound recording] : a novel /

***WINNER OF THE 2018 AUDIE AWARD FOR AUDIOBOOK OF THE YEAR***<br> <br> The long-awaited first novel from the author of Tenth of December : a moving and original father-son story featuring none other than Abraham Lincoln, as well as an unforgettable cast of supporting characters, living and dead, historical and invented <br> <br> February 1862. The Civil War is less than one year old. The fighting has begun in earnest, and the nation has begun to realize it is in for a long, bloody struggle. Meanwhile, President Lincoln''s beloved eleven-year-old son, Willie, lies upstairs in the White House, gravely ill. In a matter of days, despite predictions of a recovery, Willie dies and is laid to rest in a Georgetown cemetery. "My poor boy, he was too good for this earth," the president says at the time. "God has called him home." Newspapers report that a grief-stricken Lincoln returns, alone, to the crypt several times to hold his boy''s body.<br> <br> From that seed of historical truth, George Saunders spins an unforgettable story of familial love and loss that breaks free of its realistic, historical framework into a supernatural realm both hilarious and terrifying. Willie Lincoln finds himself in a strange purgatory where ghosts mingle, gripe, commiserate, quarrel, and enact bizarre acts of penance. Within this transitional state--called, in the Tibetan tradition, the bardo--a monumental struggle erupts over young Willie''s soul.<br> <br> Lincoln in the Bardo is an astonishing feat of imagination and a bold step forward from one of the most important and influential writers of his generation. Formally daring, generous in spirit, deeply concerned with matters of the heart, it is a testament to fiction''s ability to speak honestly and powerfully to the things that really matter to us. Saunders has invented a thrilling new form that deploys a kaleidoscopic, theatrical panorama of voices to ask a timeless, profound question: How do we live and love when we know that everything we love must end?<br> <br> The 166-person full cast features award-winning actors and musicians, as well as a number of Saunders'' family, friends, and members of his publishing team, including, in order of their appearance:<br> <br> Nick Offerman as HANS VOLLMAN<br> David Sedaris as ROGER BEVINS III<br> Carrie Brownstein as ISABELLE PERKINS<br> George Saunders as THE REVEREND EVERLY THOMAS<br> Miranda July as MRS. ELIZABETH CRAWFORD<br> Lena Dunham as ELISE TRAYNOR<br> Ben Stiller as JACK MANDERS<br> Julianne Moore as JANE ELLIS<br> Susan Sarandon as MRS. ABIGAIL BLASS<br> Bradley Whitford as LT. CECIL STONE<br> Bill Hader as EDDIE BARON<br> Megan Mullally as BETSY BARON<br> Rainn Wilson as PERCIVAL "DASH" COLLIER<br> Jeff Tweedy as CAPTAIN WILLIAM PRINCE<br> Kat Dennings as MISS TAMARA DOOLITTLE<br> Jeffrey Tambor as PROFESSOR EDMUND BLOOMER<br> Mike O''Brien as LAWRENCE T. DECROIX<br> Keegan-Michael Key as ELSON FARWELL<br> Don Cheadle as THOMAS HAVENS<br> and<br> Patrick Wilson as STANLEY "PERFESSER" LIPPERT<br> with<br> Kirby Heyborne as WILLIE LINCOLN,<br> Mary Karr as MRS. ROSE MILLAND,<br> and Cassandra Campbell as Your Narrator<br> <br> <br> Praise for the audiobook <br> <br> "Lincoln in the Bardo" sets a new standard for cast recordings in its structure, in its performances, and in its boldness. Now, let''s see who answers the challenge." - Chicago Tribune <br> <br> "Like the novel, the audiobook breaks new ground in what can be accomplished through a story. It helps that there''s not a single bad note in the cast of a whopping 166 people. It''s also the rare phenomenon of an audiobook being a completely different experience compared to the novel. Even if you''ve read the novel, the audiobook is worth a listen (and vice versa). The whole project pushes the narrative form forward." - A.V. Club <br> <br> "The result is an auditory experience unlike any other, where the awareness of individual voices disappears while the carefully calibrated soundscape summons a metaphysical masterpiece. This is a tour de force of audiobook production, and a dazzling realization of Saunders'' unique authorial structure."--Booklist <br> <br> "The finished audiobook''s tapestry of voices perfectly mirrors the novel."-- Entertainment Weekly <br> <br> <br> Praise for George Saunders <br> <br> "No one writes more powerfully than George Saunders about the lost, the unlucky, the disenfranchised." --Michiko Kakutani, The New York Times <br> <br> "Saunders makes you feel as though you are reading fiction for the first time." --Khaled Hosseini <br> <br> "Few people cut as hard or deep as Saunders does." --Junot Díaz <br> <br> "George Saunders is a complete original. There is no one better, no one more essential to our national sense of self and sanity." --Dave Eggers <br> <br> "Not since Twain has America produced a satirist this funny." --Zadie Smith <br> <br> "There is no one like him. He is an original--but everyone knows that." --Lorrie Moore <br> <br> "George Saunders makes the all-but-impossible look effortless. We''re lucky to have him." --Jonathan Franzen <br> <br> "An astoundingly tuned voice--graceful, dark, authentic, and funny--telling just the kinds of stories we need to get us through these times." --Thomas Pynchon

February 1862. The Civil War is less than one year old. The fighting has begun in earnest, and the nation has begun to realize it is in for a long, bloody struggle. Meanwhile, President Lincoln's beloved eleven-year-old son, Willie, lies upstairs in the White House, gravely ill. In a matter of days, despite predictions of a recovery, Willie dies and is laid to rest in a Georgetown cemetery. Newspapers report that a grief-stricken Lincoln returned to the crypt several times alone to hold his boy's body. Willie Lincoln finds himself in a strange purgatory, where ghosts mingle, gripe, commiserate, quarrel, and enact bizarre acts of penance. Within this transitional state, called, in the Tibetan tradition, the bardo, a monumental struggle erupts over young Willie's soul.

<opt> <anon I1="BLANK" I2="BLANK">  XXI.   Mouth at the worm's ear, Father said: We have loved each other well, dear Willie, but now, for reasons we cannot understand, that bond has been broken. But our bond can never be broken. As long as I live, you will always be with me, child. Then let out a sob Dear Father crying    That was hard to see    And no matter how I patted & kissed & made to console, it did no You were a joy, he said. Please know that. Know that you were a joy. To us. Every minute, every season, you were a--you did a good job. A good job of being a pleasure to know. Saying all this to the worm!    How I wished him to say it to me    And to feel his eyes on me    So I thought, all right, by Jim, I will get him to see me And in I went It was no bother at all    Say, it felt all right   Like I somewhat belonged in In there, held so tight, I was now partly also in Father And could know exactly what he was Could feel the way his long legs lay     How it is to have a beard      Taste coffee in the mouth and, though not thinking in words exactly, knew that the feel of him in my arms has done me good. It has. Is this wrong? Unholy? No, no, he is mine, he is ours, and therefore I must be, in that sense, a god in this; where he is concerned I may decide what is best. And I believe this has done me good. I remember him. Again. Who he was. I had forgotten some- what already. But here: his exact proportions, his suit smelling of him still, his forelock between my fingers, the heft of him familiar from when he would fall asleep in the parlor and I would carry him up to-- It has done me good. I believe it has. It is secret. A bit of secret weakness, that shores me up; in shoring me up, it makes it more likely that I shall do my duty in other matters; it hastens the end of this period of weakness; it harms no one; therefore, it is not wrong, and I shall take away from here this resolve: I may return as often as I like, telling no one, accepting whatever help it may bring me, until it helps me no more. Then Father touched his head to mine. Dear boy, he said, I will come again. That is a promise. willie lincoln Excerpted from Lincoln in the Bardo by George Saunders All rights reserved by the original copyright owners. Excerpts are provided for display purposes only and may not be reproduced, reprinted or distributed without the written permission of the publisher.</anon> </opt>

Short story master Saunders (Tenth of December) eagerly awaited first novel may not be what fans of his dystopic, sf-like short stories have expected. It begins with snippets of historical fact, accompanied by citations-presumably both actual and fictionalized-that set the novel at the time of the death of Abraham Lincoln's son Willie. The entries shift to quips made by individuals, and we realize we are hearing conversations among spirits that haunt the Washington graveyard where Willie is buried. When Lincoln returns for a grieving nighttime visit, these apparitions attempt to reunite Willie's spirit with his father. Bardo is a term from Tibetan Buddhism referring to the transitional state between death and the next realm; the wraiths in this amorphous space chatter, float about, see visions, and change shape in disorienting ways. Yet they are confined, both by their previous lives and by a fear of final judgment, of which Saunders provides a truly horrifying glimpse. VERDICT A stunningly powerful work, both in its imagery and its intense focus on death, this remarkable work of historical fiction gives an intimate view of 19th-century fears and mores through the voices of the bardo's denizens. [See Prepub Alert, 6/29/16.]-Reba Leiding, emeritus, James Madison Univ. Lib., Harrisonburg, VA © Copyright 2016. Library Journals LLC, a wholly owned subsidiary of Media Source, Inc. No redistribution permitted.