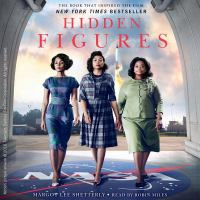 Hidden figures [sound recording] : the American dream and the untold story of the Black women mathematicians who helped win the space race /

<p>The phenomenal true story of the black female mathematicians at NASA whose calculations helped fuel some of America's greatest achievements in space. Soon to be a major motion picture starring Taraji P. Henson, Octavia Spencer, Janelle Monae, Kirsten Dunst, and Kevin Costner.</p> <p>Before John Glenn orbited the earth, or Neil Armstrong walked on the moon, a group of dedicated female mathematicians known as "human computers" used pencils, slide rules and adding machines to calculate the numbers that would launch rockets, and astronauts, into space.</p> <p>Among these problem-solvers were a group of exceptionally talented African American women, some of the brightest minds of their generation. Originally relegated to teaching math in the South's segregated public schools, they were called into service during the labor shortages of World War II, when America's aeronautics industry was in dire need of anyone who had the right stuff. Suddenly, these overlooked math whizzes had a shot at jobs worthy of their skills, and they answered Uncle Sam's call, moving to Hampton, Virginia and the fascinating, high-energy world of the Langley Memorial Aeronautical Laboratory.</p> <p>Even as Virginia's Jim Crow laws required them to be segregated from their white counterparts, the women of Langley's all-black "West Computing" group helped America achieve one of the things it desired most: a decisive victory over the Soviet Union in the Cold War, and complete domination of the heavens.</p> <p>Starting in World War II and moving through to the Cold War, the Civil Rights Movement and the Space Race, Hidden Figures follows the interwoven accounts of Dorothy Vaughan, Mary Jackson, Katherine Johnson and Christine Darden, four African American women who participated in some of NASA's greatest successes. It chronicles their careers over nearly three decades they faced challenges, forged alliances and used their intellect to change their own lives, and their country's future.</p>

An account of the previously unheralded but pivotal contributions of NASA's African-American women mathematicians to America's space program describes how they were segregated from their white counterparts by Jim Crow laws in spite of their groundbreaking successes.

In this debut, Shetterly shines a much-needed light on the bright, talented, and wholly underappreciated geniuses of the institution that would become NASA. Called upon during the labor shortage of World War II, these women were asked to serve their country and put their previously overlooked skills to work-all while being segregated from their white coworkers. The author tells the compelling stories of Dorothy Vaughan, Mary Jackson, Katherine Johnson, and Christine Darden as they navigated mathematical equations, the space race, and the civil rights movement over three decades of brilliant computing and discoveries. The professional and private lives of the ladies of Langley Research Center are documented through an impassioned and clearly well-researched narrative. Readers will learn how integral these women were to American aeronautics and be saddened by the racism and sexism that kept them from deserved recognition. VERDICT Shetterly's highly recommended work offers up a crucial history that had previously and unforgivably been lost. We'd do well to put this book into the hands of young women who have long since been told that there's no room for them at the scientific table. [See Prepub Alert, 3/21/16; "Editors' Fall Picks," p. 27.]-Kate DiGirolomo, Library Journal © Copyright 2016. Library Journals LLC, a wholly owned subsidiary of Media Source, Inc. No redistribution permitted.

With Winifred Cokling. A serviceable introduction to four African American women mathematicians who, despite discrimination, played vital roles for the U.S. in the 1960s space race. Although the illustrations are static, their rich, saturated colors provide interest. Shetterly's (author of the adult title, the basis for the movie) text barely scratches the surface of the women's stories, but she strives admirably to place their accomplishments within historical context. Timeline. Glos. (c) Copyright 2019. The Horn Book, Inc., a wholly owned subsidiary of Media Source, Inc. No redistribution permitted.