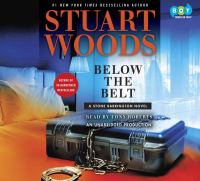 Below the belt [sound recording] /

Stone Barrington lands in hot water in this thrilling adventure in the #1 New York Times bestselling series. <p> Newly ensconced in his Santa Fe abode with a lovely female companion, Stone Barrington receives a call from an old friend requesting a delicate favor. A situation has arisen that could escalate into an explosive quagmire, and only someone with Stone's stealth and subtlety can contain the damage. At the center of these events is an impressive gentleman whose star is on the rise, and who'd like to get Stone in his corner. He's charming and ambitious and has friends in high places; the kind of man who seems to be a sure bet. But in the fickle circles of power, fortunes rise and fall on the turn of a dime, and it may turn out that Stone holds the key not just to one man's fate, but to the fate of the nation.

Stone Barrington and the gang are back in the line of fire, but with his usual unflappable aplomb, Stone always comes out on top.

The ever-enterprising and charming Stone Barrington is at his best in this 40th thriller in the series. In his new Santa Fe home, accompanied by current love interest CIA chief Holly Barker, Stone is asked to do a favor for old friend Joe Adams, a former U.S. President. From there it is a roller-coaster ride that could come to a grinding halt for the nation if not for Stone, with his contacts, ingenuity, and wit. Stone is to obtain a reinforced briefcase filled with mysterious contents that threaten a number of people, including a billionaire seeking to influence the next presidential election, a Russian CIA mole, an entrepreneur running for president, and the sitting president's reelection bid. Clever dialog and fast action well read by actor Tony Roberts make for a "stay-in-the-car for a few minutes more" listen. Another entry in a long-running series (from 1991), it may be enjoyed on its own. Verdict Not an essential addition to the series but certainly an enjoyable one. Recommended for public libraries where Woods is popular.-Sandra C. Clariday, Cleveland, TN © Copyright 2017. Library Journals LLC, a wholly owned subsidiary of Media Source, Inc. No redistribution permitted.