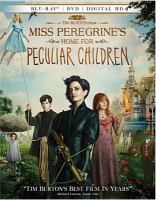 Based on the novel by Ransom Riggs.

Features: The Peculiar story, Map of days : Miss Peregrine's home/Blackpool tower, "Wish that you were here" music video by Florence + the Machine, gallery : sketches by Tim Burton and photographs, The Peculiars, Hollows and ex-Hollows.

Following clues left by his grandfather, Jake discovers Miss Peregrine's Home for Peculiar Children and the dangers they face as he gets to know the residents, learns about their special powers, and finds that he alone has a power that will help him save his new friends.