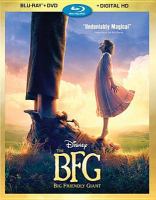 Steven Spielberg directed this adaptation of Roald Dahl's beloved novel, which centers on the unlikely friendship between a lonely orphan named Sophie (Ruby Barnhill) and the titular "big friendly giant" (brought to life via a motion-capture performance from Mark Rylance). Together, the pair explore Giant Country and collect dreams; later, they try to warn the Queen of England (Penelope Wilton) about the threat posed by the other giants, who, unlike the vegetarian BFG, eat children for sustenance. The BFG made its world premiere at the 2016 Cannes Film Festival, and is dedicated to the memory of screenwriter Melissa Mathison (who also wrote the script for Spielberg's E.T. The Extra-Terrestrial). Rebecca Hall, Bill Hader, Jemaine Clement, and Rafe Spall co-star. ~ Jack Rodgers, Rovi

Based on the book by Roald Dahl.

Features: Bringing The BFG to life, The Big Friendly Giant and me, Gobblefunk : the wonderful words of the BFG, Giants 101, Melissa Mathison : a tribute.

The elderly Big Friendly Giant kidnaps ten-year-old orphan Sophie to help him on a mission to get rid of the evil, man-eating giants who have been invading the human world.