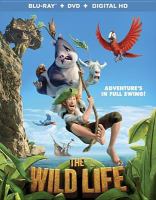 Daniel Defoe's classic tale of survival gets a twist in this family-friendly animated adventure. Restless parrot Mak and his animal pals are shocked when a ragged human known as Robinson Crusoe washes ashore on their tropical island. Although they are initially apprehensive of this strange new arrival, they decide to team up with Crusoe to save their home from a pair of conniving cats. Directed by Vincent Kesteloot and Ben Stassen. ~ Violet LeVoit, Rovi

In English or Spanish with optional Spanish subtitles.

Based on characters created by Daniel Defoe.

Features: A wild world : making The wild life, Meet the characters, Tips for our trip, The wild life musical adventure.

After being shipwrecked, Robinson Crusoe survives on a deserted island with the help of a group of animals living there.