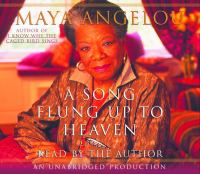 A song flung up to heaven [sound recording] /

Acclaimed author and poet Maya Angelou shares both the personal strife and news-making tragedies, including the assassinations of Malcolm X and Dr. Martin Luther King Jr., that helped shape her celebrated book, I Know Why the Caged Bird Sings.

How Angelou came to write her momentous I Know Why the Caged Bird Sings after being stunned by the assassinations of Malcolm (c) Copyright 2010. Library Journals LLC, a wholly owned subsidiary of Media Source, Inc. No redistribution permitted.